There is a surprising thread that runs through Karl Popper's assault on G.W.F. Hegel's idealism and Karl Marx's materialist philosophy of history: Popper uses his second volume of The Open Society and its Enemies to reclaim philosophy of history from the state. By using history to predict developments, and subsequently leaning on the tool of history to justify or legitimate political developments, Popper argues that (especially) Hegel and (to a lesser extent) Marx surrender freedom/emancipation to the ruling class. Authoritarianism, in this regard, is problematic precisely because it is a form of governance where the State is the source of moral legitimacy; historical predictions and philosophy of history become an arm of the State, meaning that using history as a judge is simply a manner of stating that the authorities of the future will support a contemporary political aim.

Popper's argument is surprising because I expected to hate his argument about Marx's philosophy of history in particular. Yet, Popper uses a clever tool to argue against Marx's historicism, since Popper himself upholds the normative strength of Marx's actual analysis of history. In this case, class oriented historical analysis, or historical analysis that centers on the "real conditions" of power, renders the need for "historical inevitability" or "historical projections" entirely unnecessary. Here, it's not a stretch to see Popper's argument as a germ for Thomas Kuhn's The Structure of Scientific Revolutions, whereby one scans the history and philosophy of science (in this case) to derive structural conclusions about the scientific method (rather than, say, predicting the next revolutions in science). Kuhn serves as a brilliant leftist commentator and methodologist under this lens (as ridiculous as this claim may seem).

From Popper's argument, I continuously return to the recent civil rights gains won in the fight for marriage equality. The troubling aspect of this fight was the consistent phrase, "the right side of history." Even in the force of other entirely legitimate arguments in favor of expanding civil rights to include same-sex marriage, the ideal of a "right" side in history added a troubling appeal to authority to the proceedings. It is as though activists were throwing aside their perpetual right to agitate: for, when authority recognizes civil rights, the fight for civil rights will no longer be necessary. This is a grave error, for the fight for civil rights in this case ignores the powerful claims inherent in those rights themselves, and instead opts for an appeal to future authorities. "Future states will uphold the legitimacy same-sex marriage" is not an argument in favor of same-sex marriage; it is an argument in favor of future authorities and judges as the source of legitimacy, rather than the people (the activists).

Historical inevitability is a yearning aspect of this claim to "the right side of history." There is an entirely understandable reason that some may no longer want to fight for the ability to be recognized and included within categories of basic rights: there is a certain peaceful stasis that consists within the inclusion of civil society.  Once one achieves the full status of rights under the liberal capitalist aim, one is "fully free" in the sense that no aspect of consumption will be denied. In the sense that this includes the basic right to sit at the lunch counter or order a wedding cake, this is no small victory. The point, however, is not to turn that peaceful stasis into a desire for inevitability; if a civil rights victory becomes "inevitable," it immediately loses its force to achieve emancipation from civil society, or to reign as one victory in a series of many agitating victories for the authority of people (rather than the State).

It should come as no surprise that I view the candidacy of Hillary Clinton as problematic in this specific sense: the "inevitability" of Clinton's victory in the Democratic National Convention is precisely and actively the inevitability that future authority, the future State, will view Clinton's presidency as a legitimate source of moral power. Instead of supporting any contender, any ideal that the people may choose a candidate for the Executive Branch, one must implore citizens to stand "on the right side of history" in this fight, and therefore find inclusion in the arms of State legitimation. It should be no surprise, then, that Clinton is campaigning on a vague platform of upholding rights, precisely the rights that have already been legitimized by the State (instead of the rights that are still up for grabs, still in the hands of an activist group).

A predictive philosophy of history that stands for inevitability, "the right side of history." Unsurprisingly, history moves to the right: 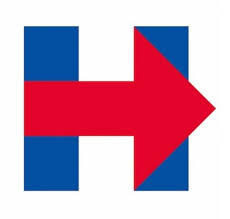 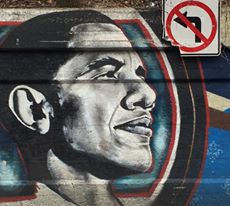 There is no emancipation in the presidency of Hillary Clinton, nor should there be: Clinton will complete the battle for those that feel civil rights are indeed on "the right side of history," that future authorities will indeed side with these specific rights (and therefore, that the State will continue to build its own authority through its inclusion of these moral aims). Yet, one can find myriad domestic and international conditions that enliven the legitimacy of an activist's claims to continually fight for an expansion of civil rights, to expand civil rights to the point of emancipation (instead of truncating civil rights within the grasps of moral authority).

This tension should explain the complicated fight for the Democratic nomination: both major candidates stand for civil rights, and both major candidates largely stand for the State as a source of moral authority in crucial ways. Yet, the divisions among people mirror the fight between Popper and Hegel, the fight between (1) the strength of using structural analysis for its own normative strengths and (2) using predictive history and historical inevitability as a moral appeal to future authority. Should authority return to the people, the future source of legitimacy will be entirely inconclusive, for the expansive fights for civil rights will be undetermined; it will be an easier road to side with the historical inevitability of "the right side of history," even if that road promises fewer freedoms. The potential of expected certainty is a powerful political force.


Posted by Nicholas Zettel at 7:49 AM