"We will live again:" so goes the incantations that close "Oxblood," one of ONO's most powerful songs from their most recent album, Diegesis. The line transcended its name, or its invocation, to take embodied truth last night, as two fiercely experimental and powerful Gospel / noise acts shared the stage at Schuba's. The deck was stacked against both acts, as more than three hours of nonstop downpour (and funnel clouds!) tormented Chicago, expanding rush hour to 7 pm and flooding out the city. Chicago's beloved Blackhawks were also attempting to win their first Stanley Cup at home in three generations, the significance of which was instantly noticeable in Schuba's external bar (outside the concert area). Against the imminent threat of euphoric sports fan riots -- a palpable display of white privileged professional rage and an open act addiction to a strong entertainment opiate -- Algiers and ONO promised to tend to wounds suffered by those in the name of justice and emancipation. Throughout the show, as each performer's intense and thorough delivery raged onward, I wondered about my own choice of opiate, and why I felt music would get us any closer to achieving emancipation than ice hockey. 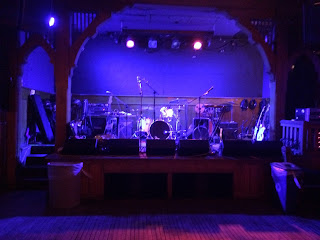 The answer is redemptive in every form. One may be surprised by the easy link between noise and Gospel music, for one form seems so brutal, unforgiving, and impenetrable, while the other may be equal parts praiseworthy and graceful; seeking glory. What Algiers and ONO proved together is that Gospel need not be openly about salvation or even praising God, but rather seeking the word or the truth, or redemption. The idea of redemption readily links noise and Gospel traditions, for redemption is necessarily collective, a collective search for a new start or a new chance. As noise obliterates the senses and therefore cleanses them, Gospel heightens the senses, to perceive injustice, chains, and obstacles to our collective truths. There should be little question why music acts can use noise and Gospel together to produce powerful, affective walls of sound, but where Algiers and ONO succeed is absolutely resonating with the demands that we achieve something greater -- or, at least recognize where our own shortcomings intersect with our desire for something new, or better.

ONO opened the night with a set that I expected to be "the most ONO set." Since the ensemble will announce their program before hand, it was clear that the group would offer something special with one of the most stripped down line ups I'd seen:

The traditional delivery instantly flooded the room with vocals that matched the percussive power of the march/dirge, and Franklin James Fisher, singer for Algiers, also offered his own voice alongside that of travis's. From there, Rebecca's keys carried the tunes alongside PMichael's bass, while DaWei's guitar manipulations and Ben's drums added textures to that funky low-end. In this format, ONO was soulful, even playful, with travis jumping from hollered greetings-as-directives ("Greetings from Chicago South Side") and certain testament ("We will live again"). The redemptive spirit of that line answered the bewildering calls that open "Oxblood," and the vocal power of that song took new meaning in a new arrangement produced by the band. PMichael noted that the song was modeled after a popular Drake offering in this form, which amplified the band's underlying soul tensions instead of the noisy, monolithic version that appears on Diegesis.

ONO once again proved that their beauty and effectiveness is in the moment, and in their undying love for reinvention and exploration. Their soulful song variations added a catchiness, or hook, that gave their work a new dimension. There is always a promise of something new with ONO, which I suspect is one of the reasons that so many of us love and follow the group in their continual resurgence.

On their self-titled debut album, Algiers use programming, noisy guitar, rhythm & blues structures, and Fisher's voice to deliver their openly political message in textured, intense bursts. In a recent interview with me, they explained their live formation and planning, and with the addition of a live drummer, Lee Tesche, Ryan Mahan, and Fisher each were able to double down on the noise. It turns out "the man behind the curtain" not only was Mahan's and Fisher's use of programmed samples, but also what sounded like entirely new patches of manipulation, loops, and synthetic noises. Mahan himself worked on a stack of synthetic noise makers, as well as bass, while Tesche used a range of reverbed-manipulated effects and percussive instruments to attack his guitars (bows added metallic squeals, drumsticks invoked harmonics,  and that's before Tesche's own winding playing style took to the instrument!). Fisher added guitar, samples, and other percussion and electronics, alongside his vocal deliveries.

From show-opening "Black Eunich" onward, it was clear that the group were ready to work themselves to exhaustion on each and every song. Each member danced and shouted and hammered away at their work, collapsing between songs as ambient shrapnel bridged different numbers. One of the most interesting stage elements was the use of slowed-down samples from the album to hold down transitions between songs, where one previous backing album would be slammed through cough syrup sheen and blasted into blissful atmospherics. As a result, there was an unending tension throughout the set, a power that met with successive cycles of release throughout each song's crescendos and breaks.

While the addition of noise, and the effective use of each possible element on stage, amplified the effectiveness of the attack on "Irony.Utility.Pretext," some of the band's most straightforward rock offerings on the album took on entirely new life live. "Old Girl" was one particular highlight in this regard, as the band heightened every element to its threshold, and Fisher dove into the audience to embrace its members.

As cheers leaked into the room from the adjacent bar, as the Blackhawks won the Cup, Algiers reminded us that the fight for emancipation will place grand crowds against just ideals.  It was impossible not to think about the irony as the crowd overpowered the band at the exact moment Algiers quieted their set for "Games": as Fisher howled about the people that come around to set your house on fire, as we bury our heads in our bottles Bibles, cries of joy continued unabated. Two worlds truly collided, in one of Chicago's most conservative and segregated wards (in this case, segregated for whiteness and power), but they were also ultimately separated by that thin door. The roar of one may have overpowered the cries of the other for a moment, but Algiers answered with a blistering set-closing that overdrove the cheers and ensured that the words of justice reigned.

This single moment provides an unending cycle of feelings that I am having trouble articulating: the banality of evil. The opiate of entertainment. The honest culpability of many well-intentioned people with injustice. The roar of billionaire entertainment industries that drowns outsiders. Mob mentality. The acceptability of white violence. The acceptable white mob. The necessity of drowning oneself from the stress of capital-professional demands. The absolute power of honest, good intentions that obstruct justice. The complete oblivion of that power wielded by that crowd. It's impossible to make sense of these competing narratives, or feelings, in one reflection (let alone from someone who's happy the Blackhawks won!), but it must be pointed out that this was a fitting and striking moment in Algiers' set.

And their power overrode those emotions, ultimately upholding the collective power of redemption. One of my favorite aspects of Algiers is that they constantly remind us that we have work to do: there is good work to be done. Through the power of their voice, through the unimaginable confluence of industrial noise and pure Gospel, they indeed express a sense of emancipation that is impossible to explain in thousands of words, but immediately apparent in each five minute song.
Posted by Nicholas Zettel at 8:25 AM